In Summer of 2017, Tinopolis – the international media producer and distributor – had a decision to make. They needed an additional broadcast solution for their industry-renowned Outside Broadcast Unit. 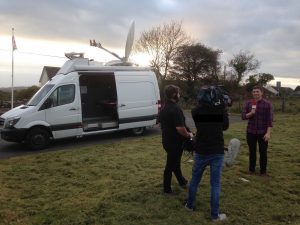 Tinopolis had the entire antennae market at their disposal but crucially chose to beef up their Unit’s capabilities by purchasing the KA Satellite Cobham 1-Metre Auto-Pointing Antenna. The aim was to improve the range and options that they can offer clients for the Unit’s work for the News, Sport and Documentaries teams that work within Wales.

Bigblu’s role is to deliver KA Satellite services for Tinopolis. In partnership with Auriga Kore Networks, who manage the routing and handoff for the broadcaster, we deliver backhaul and fibre handoff to Tinopolis.

This allows the production and broadcast teams to allowing them to securely deliver live outside broadcasts back into their networks. Our operation takes the form of transit on the diverse and redundant fibres from the Satellite Platform back to Auriga Networks at London Telehouse and from there onward to Tinopolis.

The Tinopolis Group is an international media producer and distributor. In the USA, they produce television programmes for all the top networks and in the UK they are one of the largest independent television suppliers to major broadcasters.

They work in all genres – factual, entertainment, sport, drama, reality and digital media. Their programmes are seen across the world and through our distribution company, Passion Distribution, we have a significant presence in the global media marketplace.

To find out more about our IPTV Broadcast services contact Selwyn Petterson on +44 (0)1869 222 900 or or email him at selwyn.petterson@bigblu.co.uk.